Skip to content
Estas aquí:Home-Internet is not hosted in Gilead

Internet is not hosted in Gilead

Internet often receives critics for some of its users. However, sometimes, its community can take efficient actions. TMN applauds this one.

Once upon a time in Texas

Imagine a young woman, emotionally destroyed after a miscarriage. Now, let us say that this young lady lives in Texas.

Today, added to her pain, she could face a criminal charge for killing her fetus. This is how far the new Texas antiabortion law will go.

Oh! Silly me, I was forgetting another case: she may not even have been aware that she was pregnant. That is because the “threshold” is set to 6 weeks (barely one period late).

This already awful law was accompanied by a very proactive action.

AKA a bill allows the snitching and bounty hunting of the “criminal women” (and anyone helping them, knowingly or not).

A not so sad story

There is however refreshing news about that. A website was created to allow a comfortable snitching.

Note: don’t rush looking for it, we are going to explain you why.

For a start, a clever idea raised instantly on TikTok, inviting people to flood the web site with fake reports:

It didn’t last long before the owners of the website took action, blocking too prolific people.

But this was only the beginning. The website (we won’t release its name) was also the target of several DDoS attack (so sad and unfair).

As it occurs, Internet has its own rules. For instance, Web pages are hosted by providers that have policies about their contents. The site-of-interest was initially registered at GoDaddy.

A journalist from GIZMODO pointed it out in a recent article (on Wednesday September 1st):

They didn’t hesitate for long. As soon as Friday, as reported by The Verge, the site was politely invited to go elsewhere:

Internet is not so chaotic, after all

They seem to have landed at Epik (another Host, known to be more “permissive”).

But, well, this site is now officially ill-rated by the community, poor them. 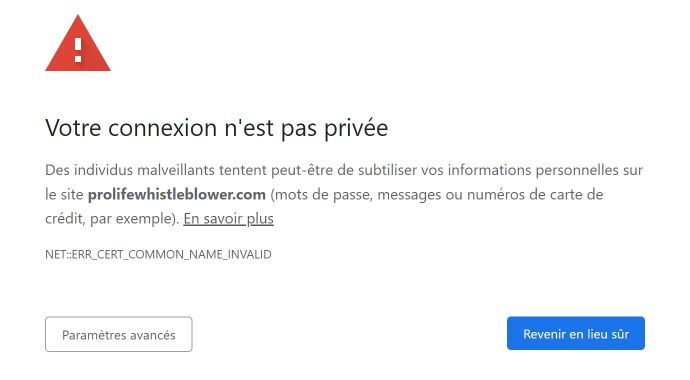 With such message (this one was from a French location BTW), people tend to be wiser …

We had it too and (for some reason) we didn’t go further: it wasn’t worth it.

As you can see, not all Internet citizens are feckless people. Refreshing indeed.

Internet is not hosted in Gilead