Text on a famous Monopoly gamecard

You may remember FBI’s Operation Varsity Blues, that shook the US educational landscape, last year.

TMN, among many others, wrote about it:

Rich Dads and the American Dream

Actually, we were more disgusted than surprised. Then came the first sentence, for the less shamefull of them all

Actress Felicity Huffman was sentenced to a symbolic vacation trip to prison, like in a “Monopoly” game.

We were still “preoccupied” about other (bolder) cheaters, like Lori Loughlin, another actress.

Her case was more serious: more money spent, in a more elaborated scam (involving her daughters, by the way).

She theoretically risked up to 45 years in jail! … Just kidding! Of course not: for rich people, there is always a way out.

I’ll give you a clue: it’s a pile of green rectangular pieces of paper. 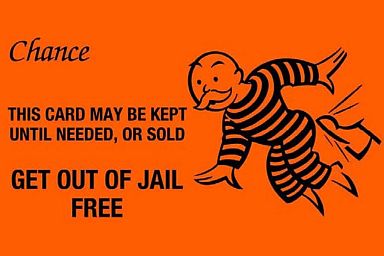 With a condition: you must delay the decision until public opinion forgets you. And, also, use that time to find some “exculpatory motives” (which the lawyers obviously found).

Result: She will go to jail … For 2 months, while her husband will get 5 months (please, don’t ask).

Let us not be indecent about the money they will pay.

The other price Lori could pay

There is, however, a remaining question:

While Felicity Huffman can, possibly, resume her acting career, I’m less sure that glamourous Lori will get this option.

No one can deny that her law tactics were efficient in court negotiations. But the rabble public is less forgiving, especially for people who are supposed to be virtue models.

During her trial, she stated a well-expressed apology (thanks to her lawyers):

“I went along with a plan to give my daughters an unfair advantage in the college admissions process.

In doing so I ignored my intuition and allowed myself to be swayed from my moral compass. I thought I was acting out of love for my children. But, in reality, it only undermined and diminished my daughters’ abilities and accomplishments.

While I wish I could go back and do things differently, I can only take responsibility and move forward” (Give me a tissue, please!)

To what, the judge answered (seemingly unmoved by her acting skills):

“Yet you stand before me a convicted felon, and for what? For the inexplicable desire to grab more.

To have whatever prestige and instant gratification that comes from being able to show off the admission of your daughters to a preferred university”.

But, as tweeted by a Manhattan DA:

As a public defender, I’ve worked every day of my career fighting for justice for people who can’t afford an attorney. I’m running for District Attorney to make sure the criminal legal system works for everyone — not just the rich and powerful.
Join us: https://t.co/8lexUM0n1J

We, away from United States of America, are so lucky not to have to deal with such a double standard. Aren’t we?