Skip to content
Estas aquí:Home-Amy Coney Barrett, under his eye

Sometimes (too often, these days), imaginary stories seem to cross over to reality. When we published an article on HULU’s serie “The Handmaid Tale”, the resemblance was already unsettling.

It is now becoming a karma to someone.

A rumor from a dystopian world

By now, you should all know the name of Ruth Bader Ginsburg’s successor.

It looks like she will not be heroic, nor revolutionary. It also looks like her ascension will not be well received (neither for the timing not for the way).

Why would she care? God is on her side.

The rumor spread like wildfire. It whispered that Amy Coney Barrett was from a fundamentalist catholic group that inspired Margaret Atwood’s famous “The Handmaid’s Tale”.

There is no definite proof of that. Margaret Atwood herself doesn’t completely remember where the “Handmaid” idea came from… Or doesn’t want to throw gas on the fire.

Still, the damage is already done. People were very quick to believe the rumor.

Why is that? We think that many believed it because of the situation USA is living, now.

In many aspects, this finishing mandate looks like a dystopian world. Many already thought of comparing it to a pre “Handmaid’s Tale” regime (long before this last hint).

In parallel, the behavior of fundamentalist (catholics or protestants) has become scary.

It doesn’t matter if Amy Coney Barrett may or may not be directly related to a frightening novel.

What matters is that people identified a threat, a plausible one.

Arguing that the accusation is untrue misses the point. She would be better inspired explaining us how her faith is different, and unrelated to her future role.

We think she won’t, how could she? The people of her faith already sealed their fate (and maybe America’s).

Sarcastically, we could ask her who is her commander. But we already know the answer. 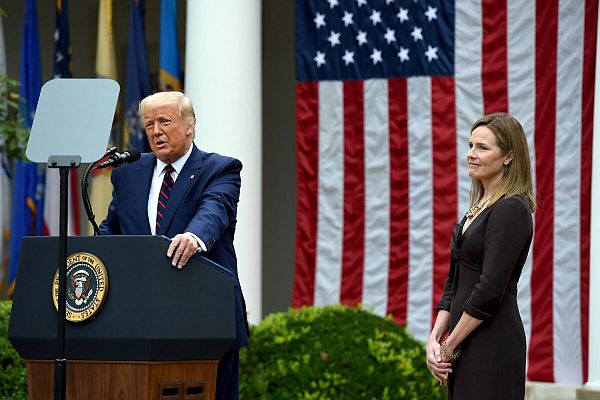 What we also know is that the novel’s sales will grow again in the following weeks. Oh! And HULU’s serie will receive more attention.

They are among the few who will thank you, Mrs Coney Barrett!